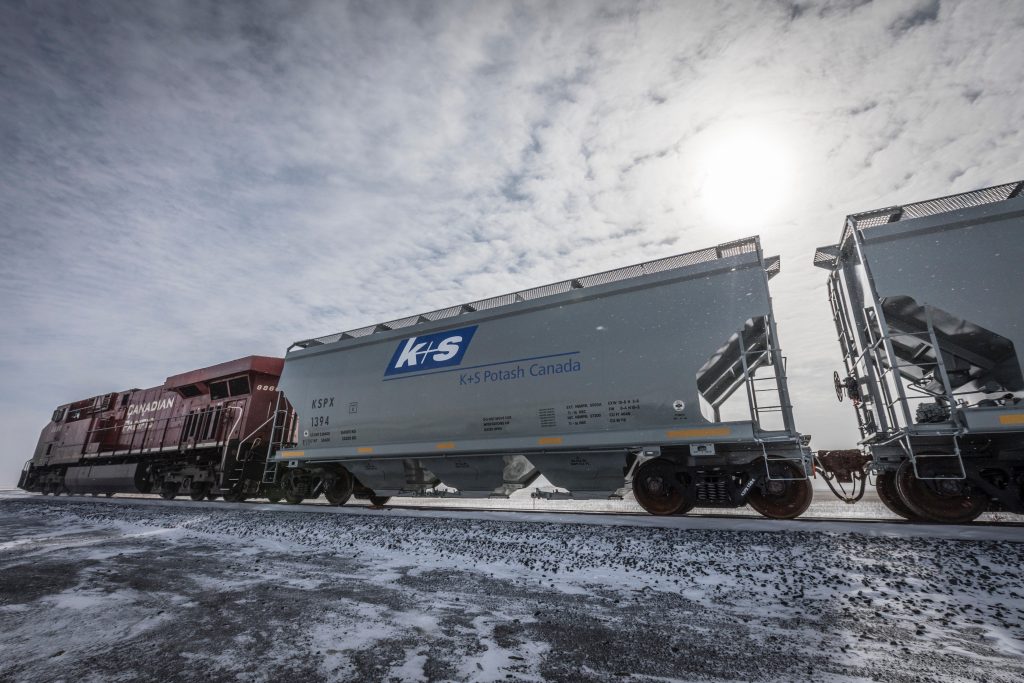 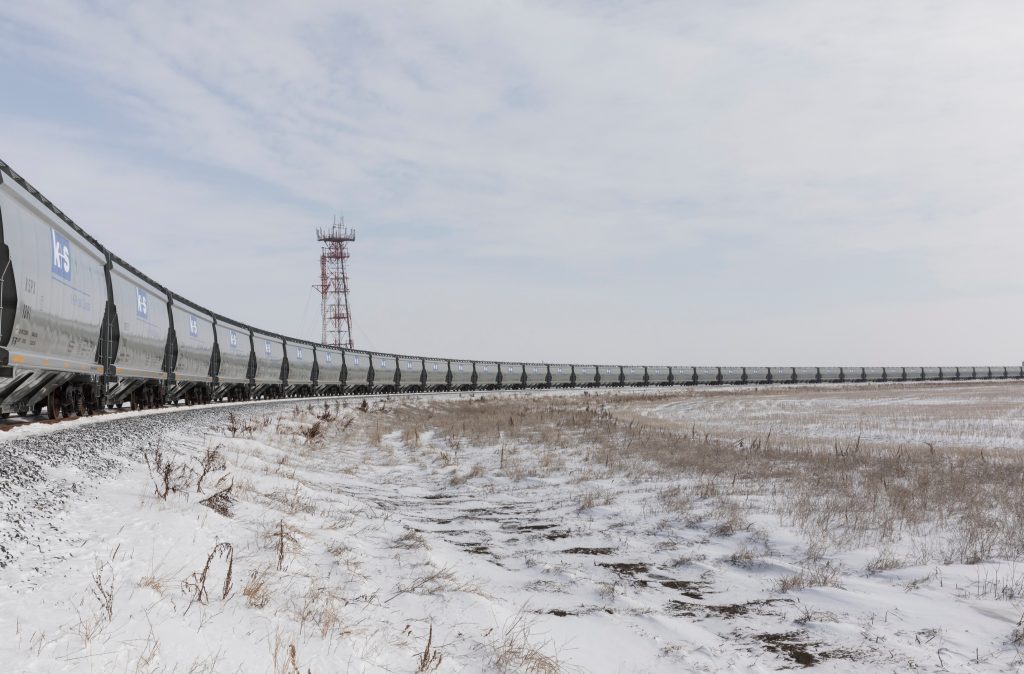 BETHUNE, SK – Today K+S Potash Canada GP (KSPC) celebrates the arrival of the first 177 of 531 custom built rail cars at its Legacy Project mine site— enough to complete one of three trains that will transport KSPC’s product to its potash handling and storage facility in Port Moody, B.C.

“The arrival of these rail cars demonstrates how close we are to production, which is expected to begin in the second quarter this year,” said Dr. Ulrich Lamp, KSPC President and Chief Executive Officer. “To see them here, branded with our company name and ready to carry our first marketable product, is really exciting.”

The rail cars will travel along 30 km of Canadian Pacific’s (CP) recently constructed Belle Plaine subdivision, which connects CP’s main line at Belle Plaine, SK to 14 km of newly constructed industrial rail line which is owned and will be operated by KSPC.

“Canadian Pacific is proud to see this important project move towards completion,” said Keith Creel, CP President and Chief Executive Officer. “The construction of the Belle Plaine subdivision is the largest single rail infrastructure project in CP’s recent history and we are thrilled to be the exclusive rail provider to Saskatchewan’s first potash mine in more than 40 years, providing the most modern rail infrastructure of all of the Saskatchewan potash mines.”

The rail cars were designed by National Steel Car and feature industry-leading design suitable for the Legacy Project’s state-of-the-art facility. They can be loaded with product while in motion, and have the capacity to hold the same volume as a regular rail car, while being slightly shorter in length, thereby optimizing timely and efficient delivery of product.

According to Steffen Brill, KSPC Senior Manager, Logistics and Transportation, 531 rail cars will be sufficient to meet initial requirements for weekly transportation to Port Moody, but additional cars will be required as production starts to ramp up later in the year.

“Once the trains arrive at our facility in Port Moody, they will be unloaded by automatic conveyor to our warehouse or directly onto a ship at one of the world’s most modern potash handling facilities,” said Brill. “From there, they’ll be shipped to regions worldwide.”

Part of the rail fleet will also be used to transport product to the U.S. All sales and distribution of KSPC’s potash will be carried out through the K+S Group’s experienced and well-established global distribution structures.

Canadian Pacific (TSX:CP)(NYSE:CP) is a transcontinental railway in Canada and the United States with direct links to eight major ports, including Vancouver and Montreal, providing North American customers a competitive rail service with access to key markets in every corner of the globe. CP is growing with its customers, offering a suite of freight transportation services, logistics solutions and supply chain expertise. Visit cpr.ca to see the rail advantages of CP.

K+S is an international resources company. We have been mining and processing mineral raw materials for more than 125 years. The products we produce from them are used worldwide in agriculture, food and road safety and are important elements in numerous industrial processes. Potash and salt are integral nutrients for the megatrend of a constantly growing and increasingly prosperous global population striving for a higher standard of living. This will result in increasing consumption of mineral resources. We serve the resulting growth in demand from production sites in Europe, North America and South America as well as through a global distribution network. K+S is the world’s largest salt producer and one of the top potash providers worldwide. With more than 14,000 employees, K+S achieved revenues in financial year 2015 of about € 4.2 billion and an EBIT of € 782 million. Learn more about K+S at www.k-plus-s.com.

K+S is putting its more than one hundred years of mining experience and world-class expertise to work on the Legacy Project, a potash solution mine and production facility being built near Moose Jaw. It will be the first new greenfield potash mine built in Saskatchewan in over forty years. Commissioning started in summer of 2016. K+S expects it will produce its first marketable tonne of potash in Q2 2017 and is projected to reach two-million-tonnes of production capacity by the end of 2017. The Legacy Project will mean new job opportunities for Saskatchewan workers and new business opportunities for Saskatchewan companies supplying goods and services to this major economic development. K+S is growing Saskatchewan, while providing the potash that is needed to help feed a growing world population. More information at www.ks-potashcanada.com.