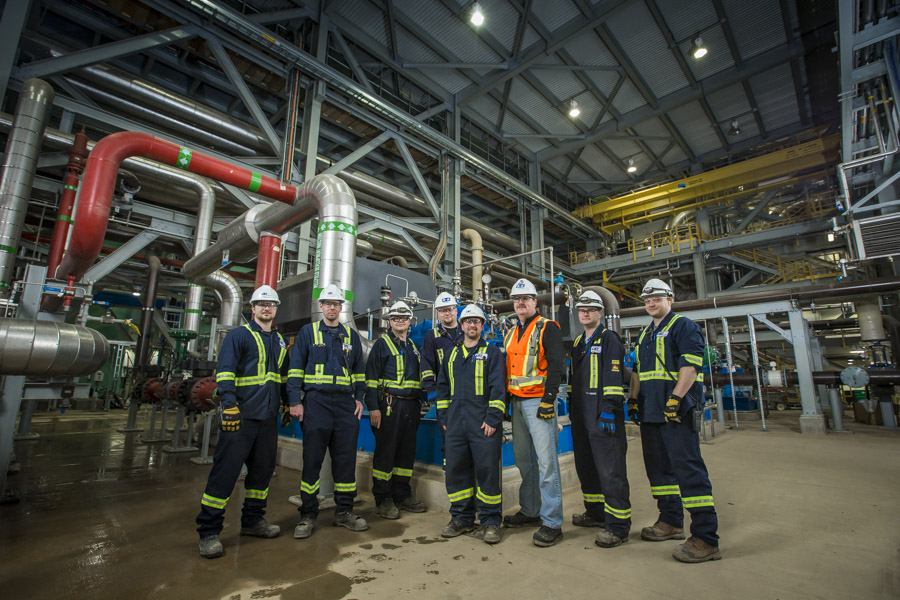 Opportunity. It’s a word that comes up time and again when talking to a team of tradespeople about why they’ve chosen to work at K+S Potash Canada’s (KSPC) Legacy Project.

“The opportunity to move around inside this company and take on different roles is huge,’’ says Jeff Campbell, a 32-year-old electrician from Regina who’s been working at the Legacy mine site for less than six months. “I’m actually moving to a production supervisor role. That’s unusual because most people in a trade stay in that trade.’’

Campbell is part of a six-person maintenance team supervised by Casey Olson and Aaron Holma. The team is made up of two electricians, two industrial mechanics and two instrumentation technicians – make that three electricians and three mechanics if you include Olson and Holma. It’s their job to ensure equipment at the $4.1 billion Legacy Project purrs along without a hitch. Campbell’s spare time is largely governed by the needs and wishes of his four children.

Team member Brad Forsyth, an instrumentation technician from Regina, pursues a handful of hobbies in his spare time. “I love hiking, kayaking and car racing,’’ says Forsyth, 36. “And I just took up ice climbing too.’’ Forsyth says he likes working for a cutting-edge company with new equipment that’s not breaking down all the time. He also appreciates the fact everyone at the mine site is friendly and approachable. “Here, you’re an integral part of the system, not just a cog in the wheel. You have a say, and it’s challenging. You don’t just come to work and do the same thing every day.’’

“We get more support and training here,’’ says Michael Pawlychyn, 47, an industrial mechanic from Regina. Opportunities and challenges are what drew Pawlychyn to work at KSPC – he and all other team members use the company bus service, which offers two-way transportation to the site from Regina and Moose Jaw. “I’ve had friends who’ve asked, and I tell them to get their resume done up and get it in,’’ says Pawlychyn. “There are lots of opportunities here to move laterally or up.’’

Supervisor Olson, 43, is married with two children and came to KSPC two years ago from a mining job in Thompson, MB. He says the remote area had certain attractions for those who enjoy the outdoors. But when he took the job, he told his wife they’d be living in Thompson for just a few years. “It ended up being 10 years,’’ says Olson, a Harley- Davidson aficionado who now lives in Regina. “We’re closer to family down here, and civilization, too.’’

When he’s not supervising the maintenance team with Olson, 35-year-old Holma can be found coaching baseball for his son’s Mosquito team, camping or playing guitar. “I was in a band, but I play on my own now,’’ says Holma, who also has a three-year-old daughter. His favourite guitarists or guitar groups include jazz greats Miles Davis and Django Reinhardt, as well as rock stars Stevie Ray Vaughan, Eric Clapton and Led Zeppelin.

Holma, who’s been at KSPC since June, says he’s particularly impressed with the company’s strong focus on self-development. “The sky is pretty much the limit here,’’ he says.

At 26, instrumentation technician Tanner Kittler has already worked at three other potash mines. One of the big things that attracted him to KSPC is the mine’s proximity to Moose Jaw, where he lives with his wife and their two dogs. Now that he’s been working at the mine for about six months, he’s found other reasons to appreciate KSPC. “A lot of the mines I’ve been at, you’re kind of by yourself. Here, everyone works together. Everyone’s involved and you have a lot of different heads to fix problems.’’

Trevor Tenetuik, an industrial mechanic from Moose Jaw, is also impressed with KSPC’s team approach to work. “They say it’s a big team and it really is a big team,’’ says Tenetuik, 34. Recently married, Tenetuik enjoys spending time at the lake and supporting his stepson in his hockey and baseball pursuits. Travel is high on his list of interests after experiencing the energy of New York City on his honeymoon.

Electrician Jason Nernberg, 34 and married with two kids, enjoys learning new things by working with other trades. But he says it’s the people at KSPC that make all the difference. “I’ve told other people that it’s great here and they should apply,’’ says Nernberg, who lives in Moose Jaw. “It seems like everybody here is willing to work together. There’s a lot more smiles on peoples’ faces than I’ve seen anywhere else.’’

KSPC, named one of Saskatchewan’s Top Employers in 2014 and 2015, plans to fill more than 150 new positions in the coming year. The company is mostly seeking tradespeople, as well as operators with a Grade 12 education and experience in an industrial setting.