Mine Caverns Under Development at Legacy Site 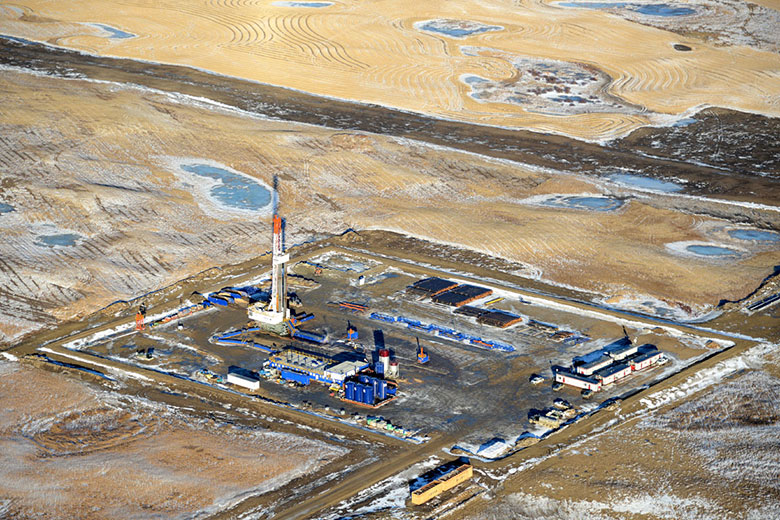 More than 30 cranes reach into the prairie sky above the Legacy mine site as people in hardhats below erect steel structures for a project that will employ almost five times the amount of steel used to build the Eiffel Tower. A few kilometres east of these structures, some of the largest and most important developments in the K+S Potash Canada Legacy Project are occurring, according to Kevin Brown, Project Director for Amec Foster Wheeler.

There, six well pads spaced a couple of kilometres from each other sit above a rich potash ore body. When the Legacy mine goes into production in the latter half of 2016, each well pad will house the control centre for nine caverns situated 1,500 m (one mile) below it, where the solution mining will occur. Two of these well pads have been commissioned and their 18 caverns will soon be enlarged to production size. “That’s the key milestone for us right now,” says Brown. “Over the next two years, we will develop all the solution-mining caverns required to reach commercial production.”

Sam Farris, Vice President and General Manager of Operations for K+S Potash Canada (KSPC), says the caverns are formed using directional drilling and water injection. He says the process is more like an oilfield operation than conventional potash mining; where people work underground extracting ore and hauling it up to the surface for processing. The caverns will be enormous when completed, “each one of them will be bigger than an entire football stadium,” Farris says.

“At a cost of $4.1 billion, the Legacy Project is the largest capital enterprise occurring in the Canadian mining industry,” says Brown; adding, “work is proceeding on time and on budget.” Brown says the construction workforce numbers will begin to ramp up this spring and peak at about 2,250 people later in the year.

“The steel erection program launched in October is the primary ‘above ground’ construction effort this winter,” Brown says. In addition to 35,000 tons of steel required to build the mine, workers will pour 75,000 cubic metres of foundation concrete – over 100,000 cubic metres including piling, backfilling and other applications – before the project is finished. “The project has its own concrete batch plant right on site,” he says.

Much of the steel and foundation work is taking place at the processing, production and storage facilities where potash contained in solution extracted from the caverns will go through an evaporation and crystallization process before being dried, sized and shipped to customers. A “tank farm” used to exchange fluids in the mining process is being constructed earlier than other parts of the final processing plant because it’s needed to manage the water and brine used in cavern development. Elsewhere, construction is well underway on 100,000 and 40,000 tonne product storage facilities. Brown says preparation work has begun for the rail tracks required to move product from the mine site to Canadian Pacific’s rail network and off to market. Track construction is scheduled to get underway later this year.

The construction site also hosts giant vessels needed for processing potash in an operation of this magnitude. Some stand or lie awaiting placement, while others are in the process of being fabricated on site because the finished product is too big to be transported here by truck. One colossal evaporator – the largest of all these vessels – stands like an abbreviated NASA rocket beside segments of another awaiting fabrication. “We’ve got a massive influx of equipment happening right now,” says Brown. “A lot of what has been purchased has been manufactured off site and is arriving now on a daily basis.”

“Large pieces of equipment are set in place during steel erection,” he says; adding, “it’s the only way to get certain equipment into the building.” The giant vessels seemingly biding their time around the construction site will soon be shunted to their workstations.