The vast expanse of the prairie provinces is generally a peaceful place, with hundreds of small communities separated by miles of open road and rolling fields. While many people in these towns and the surrounding farms enjoy the quiet rural setting, that same isolation can be rather daunting when medical emergencies happen.

In a previous story, we covered the importance and the impact of the STARS Air Ambulance program in Saskatchewan, a non-profit that quickly deploys helicopters, medical equipment, and paramedics around the province where they are needed. Now entering its 10th year in operations, STARS Saskatchewan has helped hundreds of people in their time of greatest need – including Brynleigh Yewsuk and her grateful family.

August 15, 2015, was a day just like any other on the Yewsuk farm, about 150 km northeast of Regina near the town of Melville. Brynleigh, then 3, and her elder brother Kolton, 5, were playing outside when the unthinkable happened – in a tragic accident, a heavy piece of farm equipment fell and hit Brynleigh in the head, causing multiple skull fractures and a traumatic brain injury. Her mother, Marcy, called 911 and STARS was dispatched to airlift them to the hospital in Saskatoon, which would have been a nearly 4-hour drive on the ground. She was given a STARBear, a stuffed animal with a STARS jacket, to remind her that she was now safe and cared for.

“Between the hospital and the rehab, it was about three months before she came home,” says Marcy. “And then she had to relearn absolutely everything. She couldn’t hold her head up or walk or talk. But she showed true determination.” Before long, she was back on her feet and making progress.

A Journey of Hope

Now, six years after the accident, Brynleigh, Marcy, and the rest of the family have become dedicated STARS fans for life, and the base in Regina is a staple stop whenever they are in the city. “After the accident, they invited us to a tour as soon as we were comfortable with it,” Marcy recalls. “They were so interested in knowing how Brynleigh was doing.” She specifically mentions the warm, welcoming feeling that the whole STARS team has. “They’ve been very supportive in everything, always open arms – even for our other kids as well. They’re checking in on you and making sure you’re okay.”

When they go back to the hangar, they often meet the same crew members who flew with Brynleigh on that flight in 2015, such as Jason Prokopetz, a flight paramedic. “The first time was overwhelming, to say the least,” Marcy says. “We haven’t been able to go back during COVID, but it’s always a common stop in Regina….the crew have become her friends.”

One common fixture in all these visits is Brynleigh’s STARBear. “It used to go absolutely everywhere with us – for a few years, I don’t think there was a single medical appointment in Saskatoon or Yorkton or Regina where he didn’t come,” Marcy laughs. “Camping, hotels, everything, STARBear still came along.”

The bear has played such a large part in Brynleigh’s recovery that the family has actually reframed the anniversary of the accident, August 15, as STARBear’s birthday. “We usually get ice cream cake or ice cream,” Marcy explains, as Brynleigh smiles beside her. She says that in 2017, for the second anniversary, they threw a big party ‘for STARBear’, inviting the STARS crew, her therapy team from Yorkton, and other family members and friends. To Brynleigh’s delight, everyone showed up to see her.

Over the years, as the family has gotten more familiar with STARS and its mission, Marcy has seen firsthand the increasing impact it has on people across the province – including many close to her.

“When she [Brynleigh] flew, I didn’t know anyone else who had used STARS before,” she says. “Now, there’s more and more people who are using it. It’s becoming more prominent in the community. Anybody who needs specialized care can get to it.”

She is exceptionally grateful to the donors and sponsors who keep programs like STARS going. 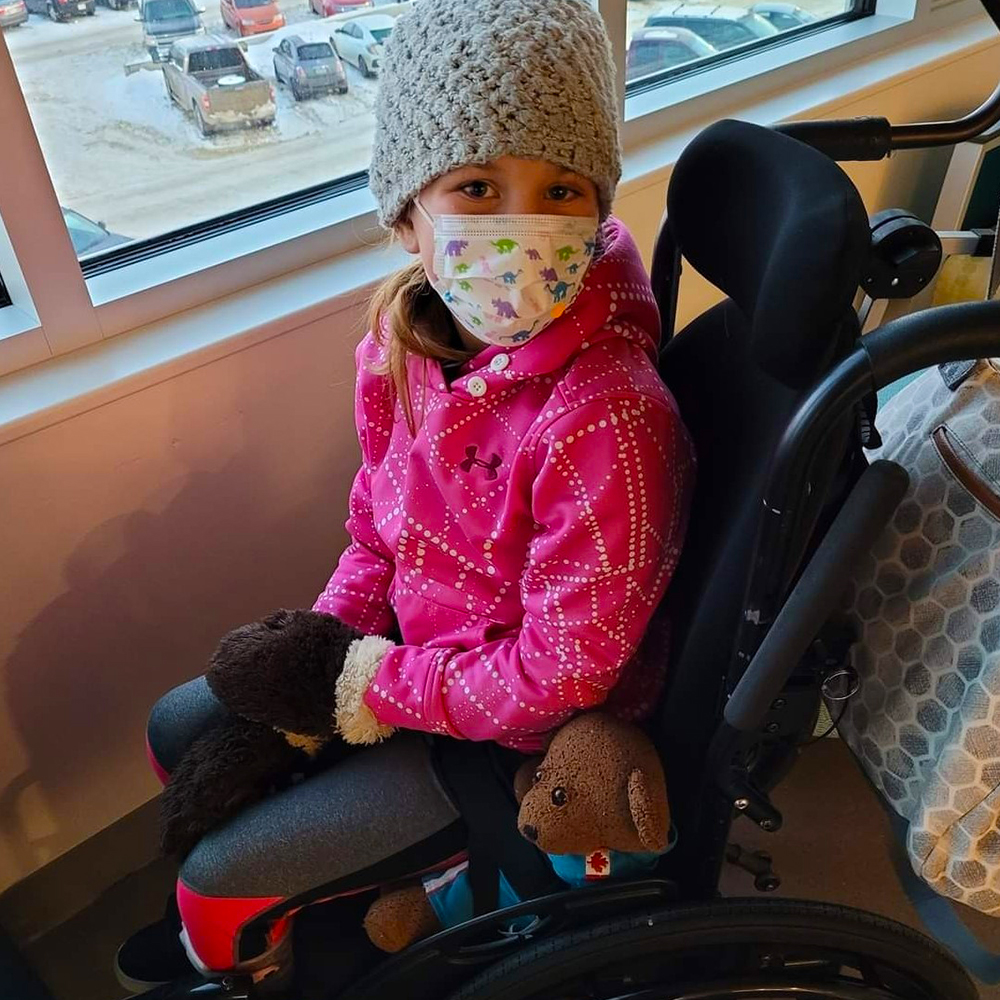 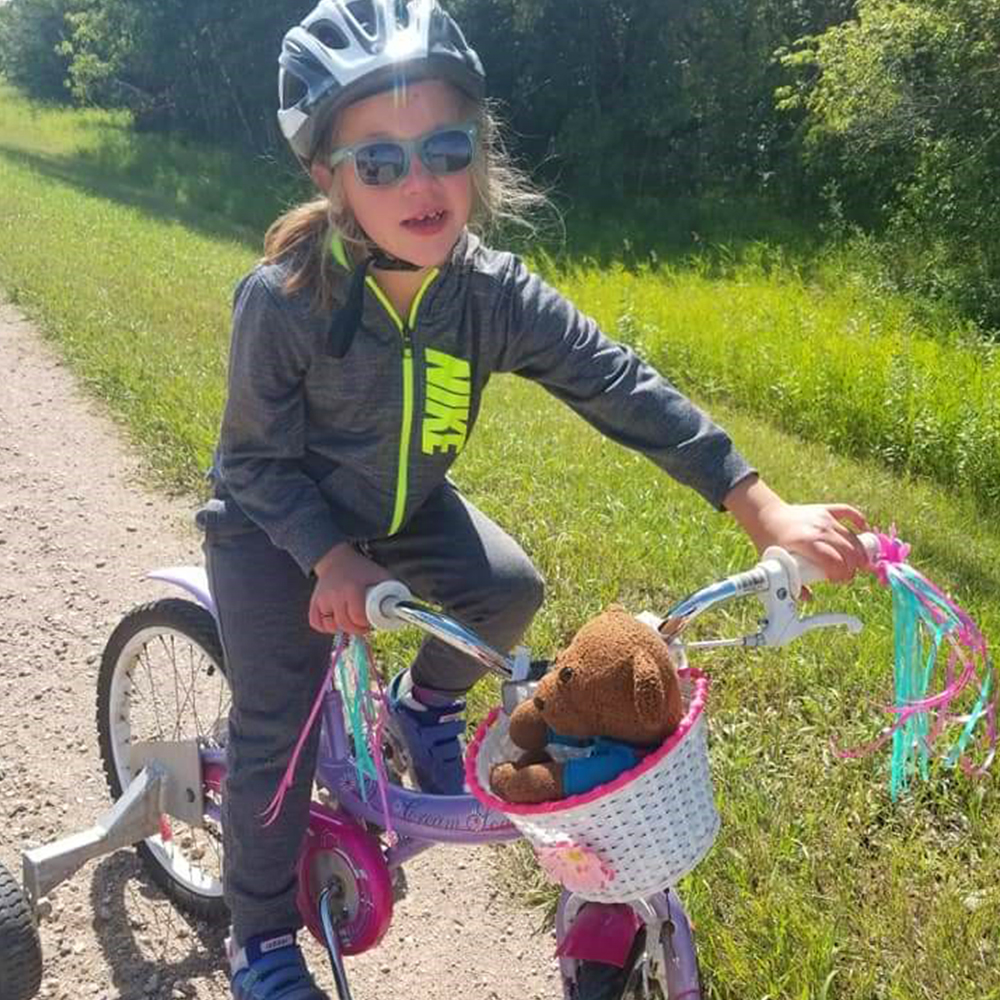 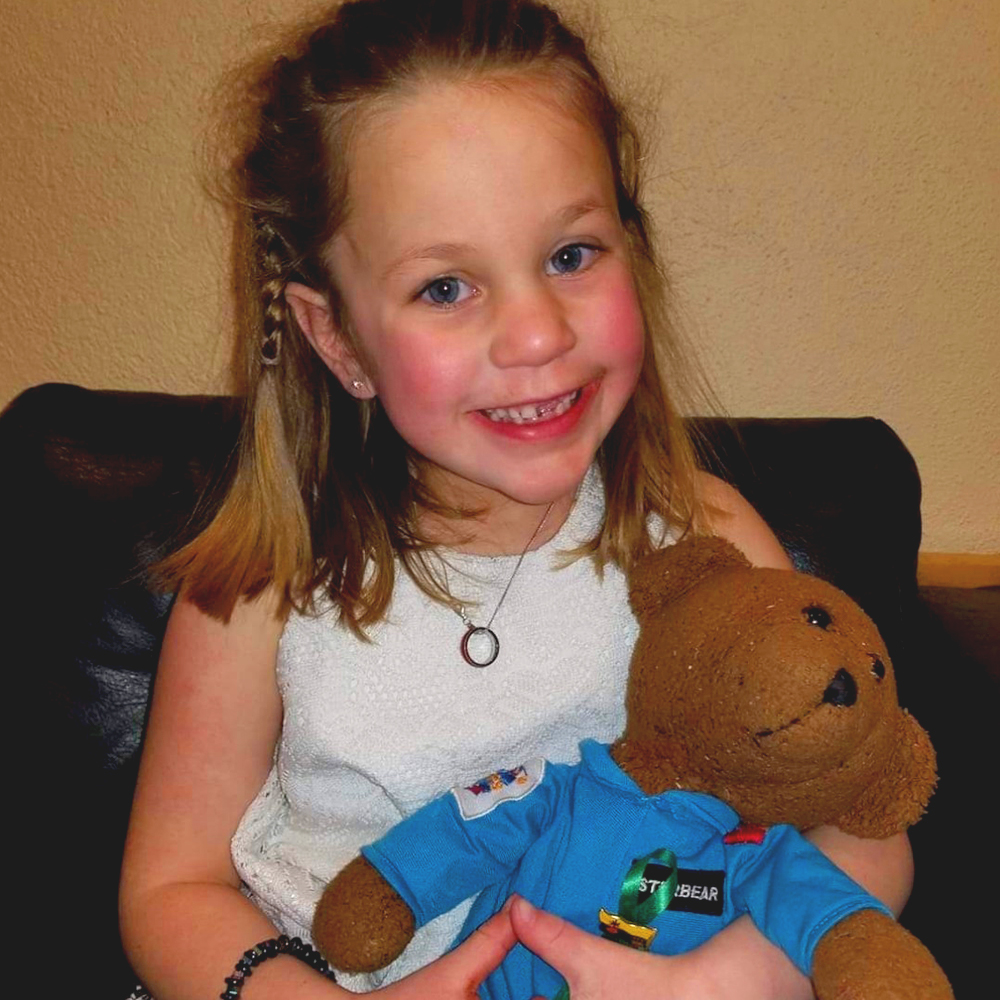 “Saying ‘thank you’ is great, but it’s not enough. You don’t realize how big it is. Because of the support for STARS, we have her – and she’s making a difference to others around her in her life.”

As for Brynleigh, her life is full of love and enthusiasm. She even knows what she wants to be when she grows up: “A teacher and a mom,” she says with a grin (further explaining that she will be teaching phys. ed.). Until then, STARBear – who, according to Brynleigh, “gives the best hugs” – will be there, a constant reminder that her family, friends, and STARS will always be looking out for her.