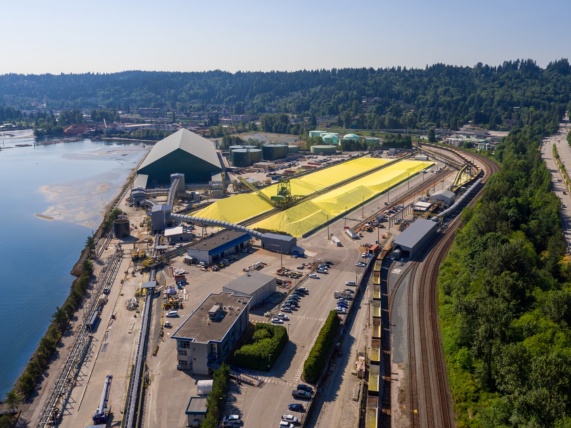 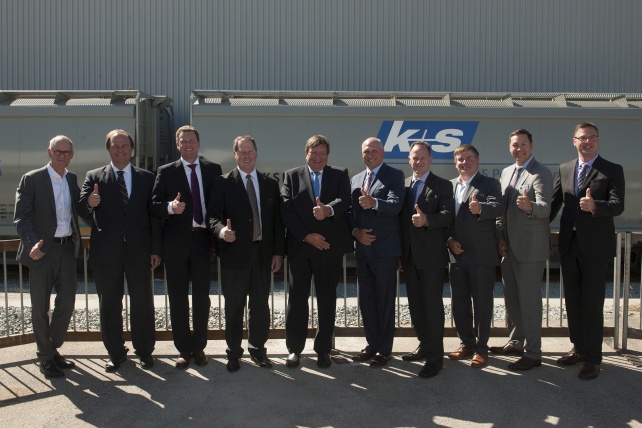 The port facility is the western port destination for potash from KSPC’s new multibillion dollar Bethune mine in southern Saskatchewan, the first new potash mine in Canada’s premiere potash belt in nearly 50 years. KSPC, a subsidiary of the K+S Group, an international resources company headquartered in Germany, celebrated the Grand Opening of the mine in May of this year and commenced production the following month.

“This port facility is essential to the success of our Canadian potash operations,” says Dr. Burkhard Lohr, Chairman of the Board of Executive Directors of K+S. “In Saskatchewan, we now have access to high-quality resources for generations to come – and from here, in Port Moody, we will deliver our products to customers around the world.”

In 2014, KSPC and PCT signed a long-term agreement to ensure that products from KSPC’s Bethune mine would be delivered to international clients in a secure and competitive manner. The agreement included modifications to PCT’s existing facility as well as the construction of a new potash storage building on the site. Now that these modifications have been completed, PCT’s site is the most innovative of its kind in the world.

“We are proud to have partnered with K+S Potash Canada on this exciting project,” says Lorne Friberg, President and CEO of Pacific Coast Terminals Co. Ltd. “The expansion of our operations allows for a greater contribution to the City of Port Moody in terms of new jobs, additional municipal taxes, and increased support to local community organizations and events. Adding potash to our portfolio contributes to the sustainability of PCT, and is key to our strategic positioning.”

Modifications to the site include a railcar unloading facility; underground and above ground conveyor belts; new transfer towers; and a 263 metre-long storage warehouse with capacity for 160,000 tonnes of product. The facility is able to unload a 18,000-tonne train in just four and a half hours. Ships with a capacity of 70,000 tonnes can be loaded at the quay.

“I would like to congratulate everyone involved in this impressive project,” says Dr. Ulrich Lamp, President and CEO, KSPC. “I would also like to acknowledge the support we have received from the community of Port Moody. This project has required collaboration from many sides, and we are grateful to all those involved.”

Potash from Bethune will be transported to the new facility in unit trains pulled by up to five Canadian Pacific locomotives, at a total length of approximately 3 km. Potash delivered to PCT’s site will be destined for China, Southeast Asia, India, Brazil and other international locations.

All sales and distribution of the potash produced at the Bethune mine will be managed by the K+S Group’s well-established and experienced global distribution structure.

K+S is an international resources company. We have been mining and processing mineral raw materials for more than 125 years. The products we produce from them are used worldwide in agriculture, food and road safety and are important elements in numerous industrial processes. Potash and salt are integral nutrients for the megatrend of a constantly growing and increasingly prosperous global population striving for a higher standard of living. This will result in increasing consumption of mineral resources. We serve the resulting growth in demand from production sites in Europe, North America and South America as well as through a global distribution network. K+S is the world’s largest salt producer and one of the top potash providers worldwide. With more than 14,000 employees, K+S achieved revenues in financial year 2016 of about € 3.5 billion and an EBIT of € 229 million. Learn more about K+S at www.k-plus-s.com.

K+S Potash Canada (KSPC) is a K+S Group company with headquarters in Saskatoon, Saskatchewan; a solution potash mine and production facility located near Moose Jaw, Saskatchewan; and a world-class potash handling and storage facility operated in partnership with Pacific Coast Terminals in Port Moody, British Columbia. Bethune mine, formerly known as the Legacy Project, is the first new potash mine in Saskatchewan in nearly fifty years. KSPC celebrated the Grand Opening of Bethune in May 2017 and projects it will reach a production capacity of 2 million tonnes by the end of 2017. The Bethune mine has created new job opportunities for Saskatchewan workers and new business opportunities for Saskatchewan companies supplying goods and services to this major economic development. All sales and distribution of the potash produced at the Bethune mine will be carried out through the K+S Group’s experienced and well-established global distribution structures.

Pacific Coast Terminals Co. Ltd. is a terminal operator in the Port Metro Vancouver, and acts as the link between ship and shore for Western Canadian resource companies and their global markets. PCT operates the world’s largest and most automated export sulphur marine terminal in the world and also handles bulk liquids. PCT loads over one million tonnes of sulphur and close to one million tonnes of bulk liquids each year onto more than 100 vessels.