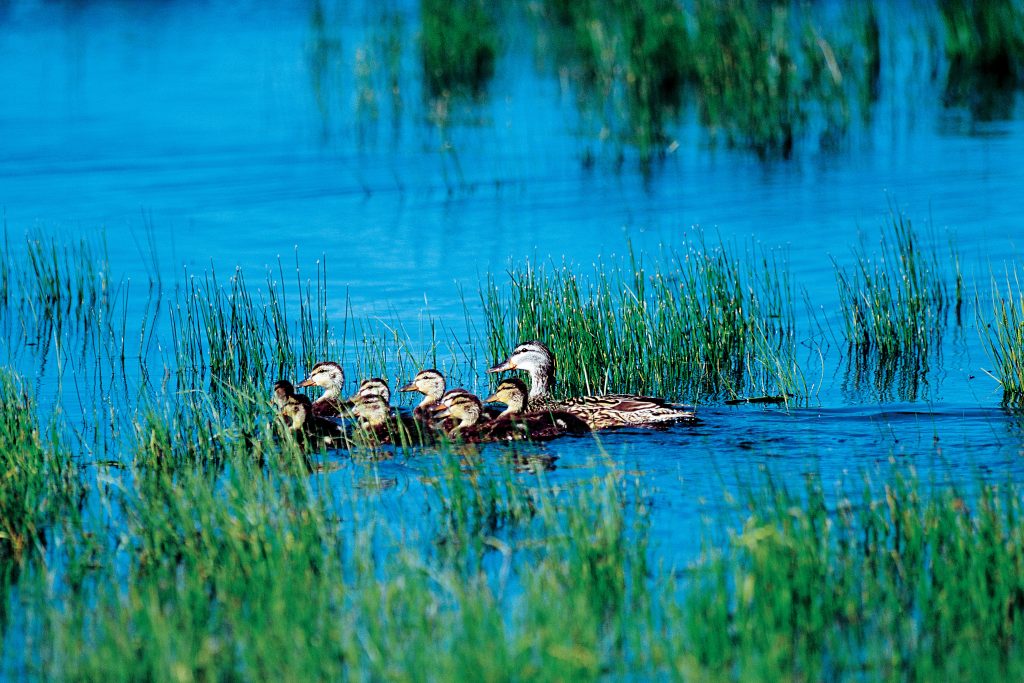 Regina, Sask. – K+S Potash Canada (KSPC) has committed over $2.8 million in funding for wetland conservation through an agreement with Ducks Unlimited Canada (DUC) to ensure wetlands affected by the Bethune mine are offset through the restoration and preservation of wetlands across Saskatchewan. The agreement, based on a unique science-based formula developed by Saskatchewan’s Ministry of Environment in collaboration with DUC and KSPC, is the largest-known wetland industry offset in Saskatchewan’s history.
“Wetlands are one of the most important eco-systems on the planet and provide critical habitat for migratory birds including waterfowl,” explains Trevor Plews, Head of Conservation Programs for DUC in Saskatchewan. “Wetlands have been in decline for many years and because Saskatchewan is in the heart of waterfowl breeding habitat in North America, this offset agreement goes a long way to help mitigate habitat loss in this very important region.”

KSPC’s offset agreement is the largest mitigation payment DUC has ever received in Saskatchewan and will enable DUC to invest in areas that provide the greatest conservation value possible. Direct and indirect impact on 199 acres of wetlands near the Bethune mine site will be offset by restoring 361 acres of wetlands in DUC’s target landscapes in Saskatchewan.

Eric Cline, Vice President of Land and Sustainable Development for KSPC, says the agreement satisfies the ministry’s condition for approval of KSPC’s Environmental Impact Statement and does so through a credible third party. “It’s of benefit to have Ducks Unlimited Canada facilitate this agreement because their interest is to maximize the amount of quality wetlands in Saskatchewan,” says Cline. “This partnership with DUC is valuable to our company not only because it ensures the offset meets our commitment to the ministry, but also because it assures the public that the conservation plan is being implemented in a scientific way.”

While this landmark initiative demonstrates the power of collaboration and responsible environmental management in the province, the ministry hopes that other industry players will benefit from this large-scale “test case” of their formula-based approach.

“The lessons learned from this experience will help us further improve and develop this promising approach,” said Brant Kirychuk, Executive Director of the ministry’s Fish, Wildlife and Lands Branch. “I would like to congratulate and thank K+S Potash Canada and Ducks Unlimited Canada for being leaders and innovators in our quest for responsible development.”

This historic announcement corresponds with this year’s World Environment Day which is themed “Connecting People to Nature,” a call to action for people to protect the Earth that we share. “Protecting the Earth is everyone’s responsibility,” says Michael Champion, Head of Industry and Government Relations at DUC, “and we want to recognize the efforts of KSPC in doing their part as a good corporate citizen.”

K+S Potash Canada GP (KSPC) is a K+S Group company with headquarters in Saskatoon, Saskatchewan; a solution potash mine and production facility located near Moose Jaw, Saskatchewan; and a world-class potash handling and storage facility operated in partnership with Pacific Coast Terminals in Port Moody, British Columbia. Bethune mine, formerly known as the Legacy Project, is the first new potash mine in Saskatchewan in nearly fifty years. KSPC celebrated the Grand Opening of Bethune in May 2017 and expects to reach a production capacity of 2 million tonnes by the end of 2017. The Bethune mine has created new job opportunities for Saskatchewan workers and new business opportunities for Saskatchewan companies supplying goods and services to this major economic development. All sales and distribution of the potash produced at the Bethune mine will be carried out through the K+S Group’s experienced and well-established global distribution structures.

Ducks Unlimited Canada is the leader in wetland conservation. A registered charity, DUC partners with government, industry, non-profit organizations and landowners to conserve wetlands that are critical to waterfowl, wildlife and the environment.

About Ministry of Environment

The Ministry of Environment’s role is to manage the health of Saskatchewan’s environment in a respectful, responsible and enforceable manner that balances growth with sustainable development through objective, transparent and informed decision-making and stewardship.

The Ministry of Environment provides science-based solutions, compliance and mitigation measures aimed at protecting the environment, safeguarding communities and helping to ensure balanced economic growth and a better quality of life for all Saskatchewan residents.