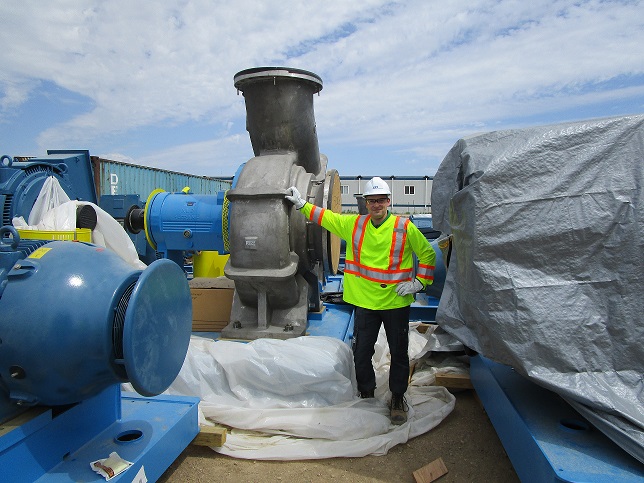 Operators and maintenance staff hired to work at the Legacy Project mine site next year can expect to receive an interesting and unique training experience.

The Legacy Operations Training Program (LOTP) will see Canadian trainers deliver theory instruction to the newly hired workers, who will then go all the way to Europe for a combination of theory and hands-on training at K+S Group’s European mines.

“We have no plant in operation in Canada where we can train them on this stuff,’’ Marcel Meiss, LOTP Training Manager Europe, said in a June interview at the Legacy Project mine site. “That’s the reason why we’ll be taking them to Europe. We’ll train them in potash processing and then they’ll come back to Canada to run those processes here at Legacy.’’

Meiss and five trainers from K+S Group’s European operations were at the Legacy Project mine site for a six-week visit as part of an ongoing project to prepare training courses for future Legacy mine operators and trades people. More than 100 operators and maintenance trades will be hired and trained in groups beginning early in 2016. A crew of experienced European operators and subject matter experts will be on-hand to assist the Canadian workers when the Legacy Project mine site moves to commissioning and startup, scheduled for the latter part of 2016. The LOTP is expected to end once the new mine is running smoothly. New operators and maintenance trades then will receive full training on site.

That’s the LOTP in a nutshell. However, the project is a little more complex than it may seem.

Germany’s technical education system is a bit different from Canada’s. While Canadians interested in technical jobs typically go to school first and get jobs afterwards, most operators and maintenance workers at K+S Group’s potash mines in Germany began their careers with a three- to three-and-a-half year apprenticeship program that blends classroom instruction, delivered by trade schools, with on-the-job training and additional theoretical instruction at the mine that hired them. By the time they’ve completed their apprenticeships, they are well-prepared to move directly into their full-time positions. The European trainers participating in the LOTP are supervisory level production operators and maintenance supervisors who volunteered to participate in the program. They and their Canadian counterparts, a similar number of experienced mine workers, are learning how to be trainers while using their past and new experiences to create training materials for future new hires.

The LOTP matched each Canadian trainer with a European counterpart who has similar specialized knowledge and experience. The Canadians visited their counterparts’ mines in Europe last year to see how they operate and note any differences in processing or equipment compared to what they and their future trainees will experience at the Legacy plant.

German trainer Sebastian Möller is impressed with the knowledge and enthusiasm shown by his Canadian counterpart while visiting Möller’s plant in Germany.

“I showed him the centrifuges and he said ‘Oh, great!’’’ Möller recalled. “And I told him we have pusher centrifuges at this other site and he said, ‘I want to see them, too!’ He has a huge knowledge about potash processes.’’

The June/July visit was the third time in Saskatchewan for the European trainers. They’ve been using these visits to acquaint themselves with the Legacy Project and develop training materials, as well as to polish their English skills and learn about Canadian culture.

Dr. Markus Gawlowski, Project Manager of the LOTP, says that like other projects of this size, the LOTP still faces challenges. However, the Canadian and European trainers have developed excellent working and social relationships and that have been key to overcoming any obstacles that arise.

“What we have learned from the Legacy Project is that it’s a huge benefit to make use of all experiences and resources that are available in our company,’’ says Gawlowski.