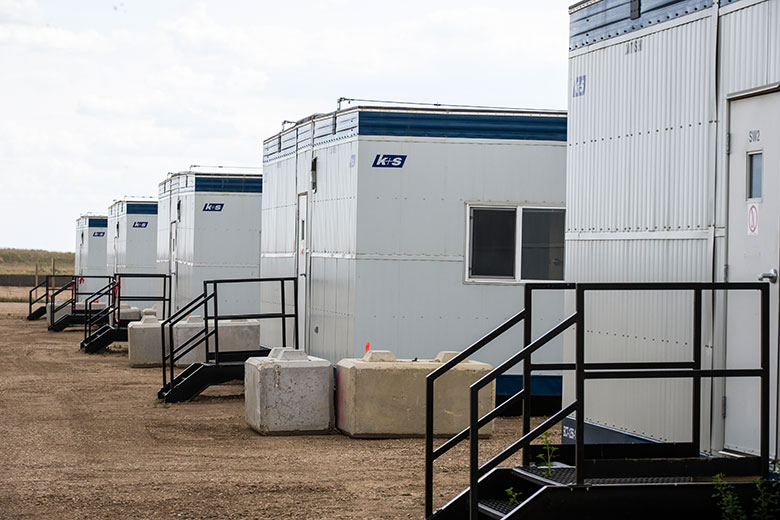 Construction camp life has seldom been this comfortable.

“This is one of the highest quality camps I’ve seen,’’ says Chris Whorton, Construction Manager, Legacy Project, Amec Foster Wheeler, and the man who oversees operations at the camp.

“And I’ve seen a lot of them. I’ve been doing this kind of work for 30 years.’’ The Legacy camp opened in May 2014 and currently is home to about 850 people employed at the project. Whorton says the camp will hit a projected 1,470 residents when construction work peaks this autumn.

ATCO operates the camp in partnership with George Gordon First Nation, an arrangement that covers housekeeping, maintenance and catering. Unlike most construction camps, this one employs “built-in’’ water, power and gas utilities for efficient and dependable services. And while smoothly operating utilities may – and should – go largely unnoticed, residents can’t miss the wide range of recreational activities offered at the camp. There are two small movie theatres where people can watch everything from Hollywood offerings to pay-per-view sporting events and there are billiards and foosball tables for those who appreciate good old live, three-dimensional gaming. There’s also a large, well-equipped and popular exercise facility, and the camp recently hired a recreation director who will coordinate and organize different recreational activities for the residents. There’s even a lounge that seats about 250 people.

Tractor operators Julie Wangler, from Vancouver, and colleague Angel Polsom, of Saskatoon, give high marks to the KSPC construction camp.

“I especially like the big beds, the privacy that workers have with the single rooms and, of course, the food!’’ says Polsom.