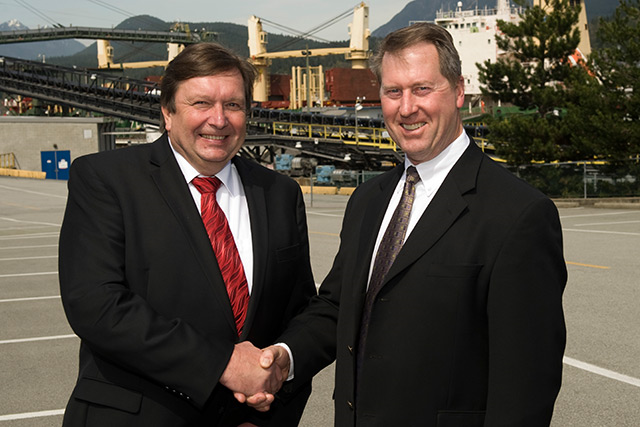 Port Moody, British Columbia – As K+S Potash Canada GP (KSPC) continues toward commissioning the Legacy Project mine in the summer of 2016, plans for how to best bring future potash products to market are also being developed further.

On March 12, 2015, Pacific Coast Terminals (PCT) received the permit from Port Metro Vancouver (PMV) for the construction of the potash handling and storage facility in Port Moody, British Columbia.

“The permit for the port facility is another step forward for the Legacy Project,” said Dr. Ulrich Lamp, President and CEO of K+S Potash Canada. “The port facility will allow K+S to export potash produced at the Legacy mine site in Saskatchewan to international clients in developing regions.”

The permit called for the modification of PCT’s existing facility, which includes the construction of a railcar unloading building and potash storage warehouse, and upgrades to the water treatment facilities and ship-loading equipment.

The facility in Port Moody will have the capacity to hold more than 150,000 tonnes of potash, and the warehouse will be three football-fields in length. Even with the modifications, the facility will continue to use PCT’s state-of-the-art operations systems and processes.

“Pacific Coast Terminals is committed to a healthy and safe environment,” said Dr. Martin Ponzlet, Project Manager of the Port Project. “KSPC shares their values, and we’re excited to work with them on this important aspect of the Legacy Project.”

K+S Potash Canada GP is part of the K+S Group, an international resources company. We have been mining and processing mineral raw materials for 125 years. The products we produce from them are used worldwide in agriculture, food and road safety and are important elements in numerous industrial processes. Potash and salt are integral nutrients for the megatrend of a constantly growing and increasingly prosperous global population striving for a higher standard of living. This will result in increasing consumption of mineral resources. We serve the resulting growth in demand from production sites in Europe, North America and South America as well as through a global distribution network. K+S is the world’s largest salt producer and one of the top potash providers worldwide. With more than 14,000 employees, K+S achieved revenues in financial year 2014 of about € 3.8 billion and an EBIT of € 641 million. K+S is the commodities stock on the German DAX index. Learn more about K+S at www.k-plus-s.com.

K+S is putting its more than one hundred years of mining experience and world-class expertise to work on the Legacy Project, a potash solution mine and production facility being built near Moose Jaw. It will be the first new greenfield potash mine built in Saskatchewan in nearly forty years. Commissioning is targeted for the summer of 2016. K+S projects it will reach two-million-tonnes of production capacity by the end of 2017. The Legacy Project will mean new job opportunities for Saskatchewan workers, and new business opportunities for Saskatchewan companies supplying goods and services to this major economic development. K+S is growing Saskatchewan, while providing the potash that is needed to help feed a growing world population. More information at More information at www.ks-potashcanada.com.