Huge vessels being trucked to K+S site near Bethune 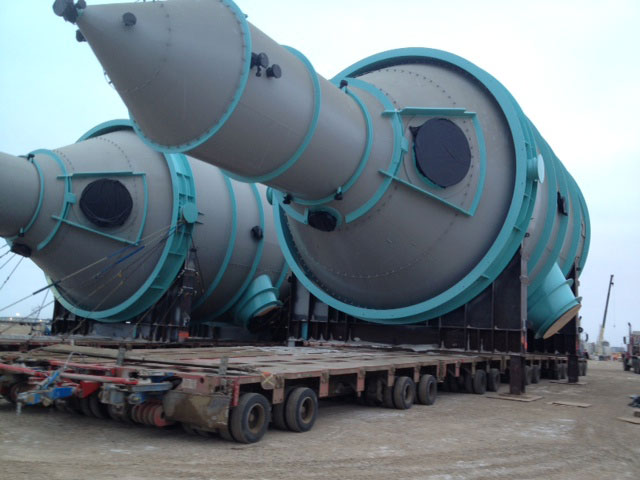 REGINA — They look like giant booster rockets being transported to their launching pad.

They’re called evaporators and they’re being trucked by ALE Roll-Lift Canada to K+S Potash Canada’s Legacy Project, the site of K+S’s $4.1-billion solution potash mine under construction near Bethune, 56 km northwest of Regina.

The evaporators were “modularized” (assembled from components manufactured in the U.S.) at the Babcock & Wilcox manufacturing plant in Melville, the company said in a press release. About 80 B & W employees worked on the vessels over the past year at the Melville facility, which specializes in the assembly of large modules to reduce site construction times.

Preparations for the move began two years ago, assisted by the ministries of the Economy and Highways and Infrastructure, along with SaskPower and other agencies, B & W said.

The evaporators will be used as part of the solution mining process at the K+S mine. In fact, these are the first two of six evaporators being shipped to K+S site; B & W will ship four more units in spring of 2015.

Believe it or not, these are the smaller of the nine evaporators that K+S will use in the solution mining process, according to Sam Farris, vice-president of operations for K+S at the Legacy Project.

“There are three (evaporators) that are slightly bigger that are being built on site because they’re too big to ship legally on the road,’’ Farris said.

“We get a brine from the solution mining process, so it’s got some potash in it. But we have concentrate it by boiling water from that brine. Those vessels are basically giant tea kettles.’’

The K+S mine is expected to be commissioned into service in the summer of 2016, with production ramping up to two million tonnes of potash per year by the end of 2017.

Other facts about the shipments:

Nevertheless, drivers should expect delays along the route, and even consider choosing an alternate route, a government spokeswoman said.