KSPC Lends a Hand for Work and Education 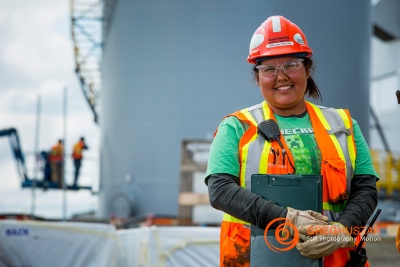 With a package of initiatives including scholarships for the next generation of Aboriginal students, sponsorship of the Wakamow Pow Wow celebration and the Morris Agecoutay Memorial fastball tournament, and most importantly, very real jobs at the Legacy site and in the new corporate head-quarters in Saskatoon, the Corporate Social Activity department at KSPC has been hard at work in 2014, winning over the hearts and minds of the people of Saskatchewan – which has a large Aboriginal (First Nations and Métis people) population – and proving itself to be a very at-tractive employer in the region. “Around 200 descendants of the original inhabit-ants of this country have found work in different areas of the Legacy project, most with contractors working at the construction site,” explains Eric Cline, Vice President Corporate Social Activity at KSPC. “That’s far more than we would have expected two years ago.”

Together with Vice President of Human Resources and Corporate Services, Kim Poley, Cline works with Employment and Business Coordinator, Terry Bird, and Human Resources Advisor (FNM Employment), Nick Crighton, to establish KSPC as a positive brand and bolster the company’s reputation as an excellent employer in Western Canada, one which offers solid opportunities for the future. In August, Nick Crighton was hired specifically to seek opportunities for hiring new Aboriginal employees, and to establish direct contact with a number of different First Nations organizations such as tribal councils and educational institutions.

“We hope that this will help us to start a variety of new employment relationships directly at our mine site and corporate office,” says Kim Poley. KSPC currently has 211 employees working at the Headquarters in Saskatoon and at the Legacy Site, and that number is expected togrow to nearly 400 people by 2019.

Beginning in 1763 with the Royal Proclamation, land acquisitions in Canada were conducted by the British Crown on the basis of treaties made with First Nations governments. Today, however, the lives of many Métis and First Nations are still shaped by poverty, unemployment, lack of education, and serious health problems. Over the past 50 years, the original inhabitants of the Canadian provinces of Saskatchewan and Manitoba –which represent 15% of the population– have increasingly demanded the rightspromised to them by treaty and a greater share of economic activity and prosperity.

KSPC’s initiatives oriented toward First Nations and Métis are considered to  be exemplary and have drawn a lot of positive attention. In 2013 and 2014, the K+S subsidiary has awarded contracts valued at approximately 200 million Canadian dollars to companies owned by First Nations or Métis people or in which Aboriginal people are involved.