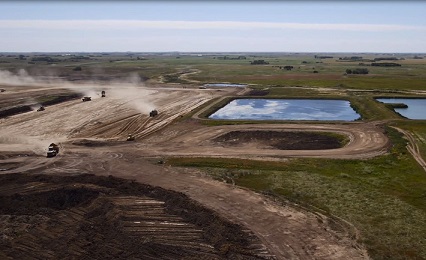 There are many things that spark great partnerships. For the town of Bethune and KSPC, the source of ignition was a mutual need for wastewater disposal.

In order to further its growth and development, the Village of Bethune, located approximately 60 km from Regina within the Rural Municipality of Dufferin, required an expanded sewage lagoon. The $5.6 million cost for the project would have to be divided amongst Bethune’s 400 residents. At $14,000 per person, the steep price tag meant that neither the lagoon nor the Village would undergo expansion.

Meanwhile, the number of employees and contractors at KSPC’s Legacy mine site, located approximately 18 km from Bethune, was rising toward an estimated peak capacity of 2200, which would be reached sometime in 2015. By 2012, it was apparent that there would be no way to build the mine without a construction camp. When at its peak capacity, the camp, located approximately 3 km from the mine site, could potentially produce up to 80,000 gallons of wastewater each day.

Rodney Audette, Administrator for the RM of Dufferin and Village of Bethune, said, “After reviewing what we had for our own requirements, the decision was made to contact KSPC to see what type of sewage treatment needs they had and if there was something we could look at to benefit each other.”

In addition to hauling camp wastewater to either Moose Jaw or Regina, “KSPC was going to originally build its own treatment facility for site wastewater. We saw an opportunity to invest in and work with the closest community to meet mutual needs instead,” said Eric Cline, VP of Corporate Social Activity for KSPC.

The agreement was signed in the spring of 2013, and the benefits that Bethune will reap from the sewage lagoon partnership are numerous. “It provides us with very long-term effluent disposal and treatment and will allow us to contemplate residential and commercial development within the Village of Bethune for decades to come,” said Audette, speaking warmly of the partnership and KSPC’s presence in the area. “The municipality continues to appreciate KSPC’s community involvement,” he continued.

Cline added, “The expression ‘win-win’ is somewhat overused but does apply here. It’s good for the community and it’s good for us. Progress on a huge project like Legacy requires close cooperation with local governments and KSPC appreciates the close working relationship it has with both the RM of Dufferin and the Village of Bethune.”