Pioneers on the Prairie 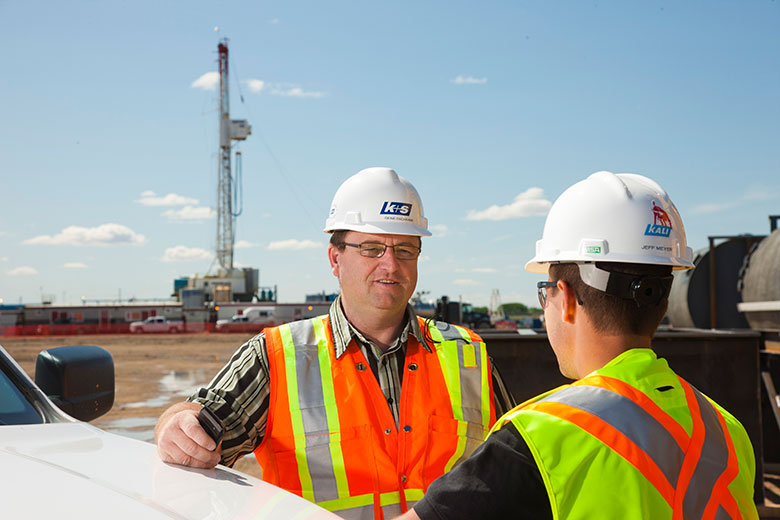 Legacy: K+S Group is setting the stage for a prosperous future in the boundless prairie of western Canada. Two years after the groundbreaking ceremony, the investment project worth CAD $4.1 billion is starting to take shape.

The pioneering spirit is alive and well,and it has a name: Legacy. ‘In the middle of nowhere’ – at least from a German point of view – in the southern part of Saskatchewan, a little more than 50 kilometers from the capital city of Regina and Moose Jaw and 18 kilometers from the next town – Bethune, a village of 500 people. This is the site where several hundred men (and women) have been building K+S’s new potash production plant since the summer of 2012. A pilot cavern for extracting potassium-bearing brine from a depth of roughly 1,500 meters, as well as the first 72 production drills have been completed. Preparations for expanding these drill holes into 36 caverns spread across the vast estate are underway. Legacy is scheduled to go into production in two years’ time, with a planned initial annual capacity of two million tonnes in 2017 and a final capacity of 2.86 million tonnes. To put this into perspective, all European K+S Group sites combined currently yield approximately seven million tons. And the possibilities in Canada are just as boundless as the country itself: Saskatchewan is rich in natural resources, such as gold, diamonds, oil, gas, uranium, and, most importantly, 60 percent of the earth’s exploitable potash reserves.

“The decision to build this site demonstrated a great deal of business foresight,” says Dr. Ulrich Lamp, CEO and President K+S Potash Canada (KSPC). “It will contribute to securing the prosperity of the entire group.” Two years into construction, Legacy is growing at a breathtaking pace both above and below the dusty prairie soil. Caterpillar bulldozers are criss-crossing the construction site, 30-ton trucks are loading and dumping excavation in fiveminute intervals, workers are hammering, sawing, cutting, digging, laying concrete. “Every month it’s a completely different view, the work is progressing at an amazing pace, but it’s really only the tip of the iceberg,” says Gene Cochrane, Superintendent of Construction, with a smile. He has been here from the start and exudes the same enthusiasm as all other members of the Legacy team, be it workers donning the blue K+S logo on their hard hats or the logo of one of the contractors.

The skeleton frame of the three-story tank farm is completed and is scheduled for transfer to the operating team in the fourth quarter of 2014. This same applies to the warehouse, pumping station, and lab. Intensive shuttering and pouring work is being carried out for the central component of the site, the evaporation, crystallization, and separation building. A concrete factory delivers up to 900 cubic meters each day. At present, about 1,000 workers are on duty at this major construction site, and next year this number is set to rise to over 2,000 during peak times. A camp with 1,470 rooms was built four kilometers from Legacy, as these workers also need somewhere to stay. The lodgings are equipped with single rooms with a full bathroom, flat-screen TV, Internet, workout room, TV lounge, pool table, foosball table, main lounge, and a huge restaurant offering a broad selection of dishes from satée skewers with hoisin sauce and pepperoni pizza through to ‘German’ bratwurst. The chocolate-peanut butter mousse from patissière Paula Pilipov is especially popular with the workers. Her boss, Robert Burry, is proud of his staff of 12, which will grow to a team of 80 to 90 by 2015. “Most workers gained five to six pounds within the span of three weeks, despite the hard work,” thanks to his staff.

Switching gears: Deep drilling on Legacy’s ‘Pad 6,’ approximately four and a half kilometers from the center of the future potash plant. Dustin MacIntyre is carefully lifting three steel drill components, each of which measures 9.5 meters and weighs 300 kg, from the control room of the 50-meter-tall drilling rig. Coby Cockerill and Derek Marcinyk deftly move into place and disassemble the drill parts with hydraulic assistance before they are suspended from the top of the rig, looking like a bunch of pick-a-sticks. This is physically taxing work. “Today we reached the potash layer 1,600 meters below the surface,” says their boss Les Fredette with a satisfied smile. “We will spend the next three days drawing samples.” The salt layer below Legacy is up to 80 meters thick. It contains three potash seams measuring 18, eight, and six meters. Visitors must climb one of the viewing platforms – or, better yet, take to the air – to grasp the sheer scope of this project. Currently, construction and development work is taking place over an area covering close to 50 square kilometers. The existing mining rights already entail a much larger region. Getting the logistics right is a tough challenge in itself, given the vastness of this construction site. Kevin Brown, AMEC Project Manager, is the director in charge of Legacy. He has been handling similar jobs for 22 years, yet this project in Saskatchewan is something special: “It’s a rare opportunity to be able to contribute to such a vast project taking shape from the initial blueprint all the way to going productive.” Legacy is “right on schedule,” despite a long and harsh winter in 2013–2014 with high snowfall and bone-chilling temperatures bottoming out at minus 50°F. According to Brown, the reason for this is the professional, detailed planning and the “fantastic cooperation” between the German and Canadian staff. Brown, Gernot Wittig (K+S), in charge of procurement, and Dr. Gerd Dahlhoff (controlling), who was ‘loaned’ to the project from Bayer, form the core management trio in charge of the 250+ members of the Legacy Project Execution Team (LPET) under the direction of Ulrich Lamp. Brown, Wittig, and Dahlhoff have ample experience, acquired at large-scale construction projects around the world. The Technical Authority Team (TAT) led by K+S veteran Matthias Schrader is in charge of meeting the quality criteria of K+S: “Our 25 engineers from Germany and Canada ensure that production processes and plant equipment vetted in Germany are utilized at Legacy across all areas.” An ongoing optimization process helps keep investment and operating costs as low as possible. According to Schrader, one reason why coordination between LPET and TAT is working out so smoothly is “owing to Jochen Kirn, our K+S engineer in the Legacy Project Execution Team.” The leadership team at the KSPC headquarters located in Saskatoon, about a two hours’ drive north of Legacy, is also busy, doing the paperwork necessary to make Legacy happen and to establish KSPC as a new company in Saskatchewan. The team comprises Eric Cline, Vice President of Corporate Social Activity, Colin Braithwaite, Vice President of Health, Safety and Security, Kim Poley, Vice President of Human Resources and Corporate Services, Terri Uhrich, General Counsel, as well as Luis Mendoza, Chief Financial Officer and Jan Grommas, Manager, Legacy Program Coordination, all of whom are highly excited about Legacy.

KSPC now has a presence in Vancouver, where Steffen Brill, Senior Manager, SCM & Logistics, is in charge of the overall execution and coordination of the port, while construction engineer Dr. Martin Ponzlet, Project Manager, Port Project, from Bayer is directing the implementation of the harbor project. K+S launched the LOTP (Legacy Operations Training Program) in order to spark the enthusiasm of the European staff and to introduce the Canadians to the high technological standard of the European sites. The first wave of KSPC employees spent several weeks visiting the Werra, Zielitz, and Frisia Zout sites, and now a German delegation is getting ready to embark on a trip to Canada. These and all other activities in preparation for starting operations at Legacy are coordinated by the Operational Readiness Team led Sam Farris, Vice President of Operations. Today, only a few tanks waiting to be welded together dot the meadowy landscape, but in just a few months’ time, dozens of kilometers of silvery pipeline will transport water from Buffalo Pond Lake to the pumping station and on to the drill holes, where it will wash valuable potash from the rock one and a half kilometers below the ground. Once they are finalized, each of the 36 caverns will be about as large as the Munich Allianz Arena. Legacy will also be connected to the railway network, so Canadian Pacific Railway is presently constructing a 30- km branch line solely for this purpose – their largest project in 40 years. The new line includes a 14-km loop leading into the future potash plant, in addition to ca. six kilometers of storage sidings. The final product will have to make a long journey before it can be loaded onto ships delivering it to target ports in China, India, Malaysia, and Brazil. Legacy and Vancouver are roughly 1,800 kilometers apart, and the trek also involves crossing the Rocky Mountains. The freight trains scheduled to make the trip twice a week will consist of a mind-boggling 177 carriages pulled across the Rockies by five locomotives, adding up to a total length of 2.6 kilometers. Each trip will take three to four days. KSPC has already signed an agreement with port service provider Pacific Coast Terminals that allows the new company to build and operate a new warehouse and handling facility in Vancouver. Given the grand scale of the Legacy Project, it is imperative that all project interfaces interconnect seamlessly and there are no delays. “So far everything has been running as smoothly as can be,” enthuses Dr. Ulrich Lamp and the 180 employees, 80 of which are stationed at the Saskatoon headquarters. Its address, by the way, has a very nice ring to it: 220 Wall Street.

Canada’s Prime Minister Stephen Harper praised the strong initiative of German companies in Canada during his recent visit to Germany at the head of a business delegation. Recent investments amount $11 billion. K+S Group’s Legacy project is one of the largest investments today, with a total sum of CAD $4.1 billion. K+S Chairmen of the board Norbert Steiner met with Stephen Harper (front left), Chancellor Angela Merkel and the President of Canadian Manufacturers & Exporters, Jason Myers in Berlin. 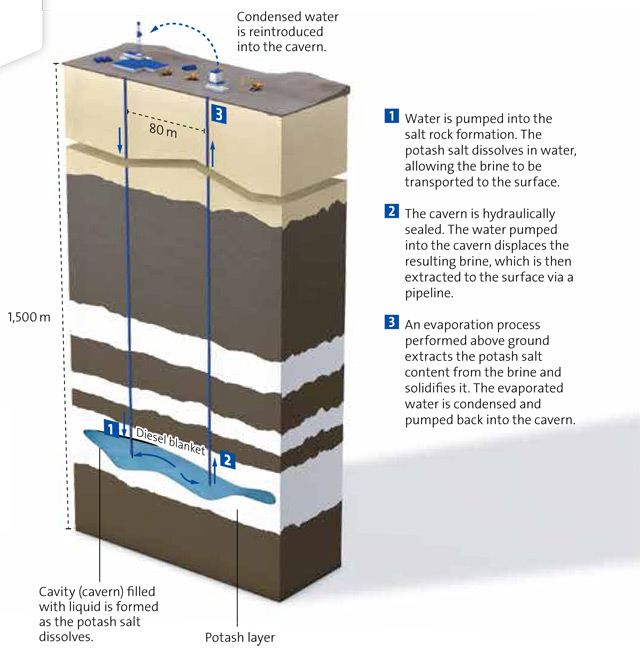