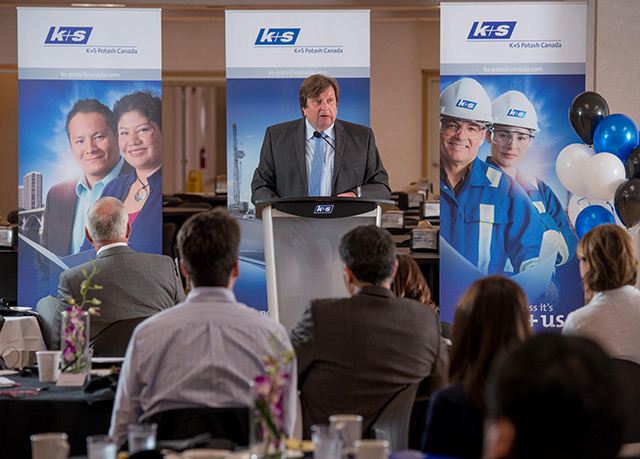 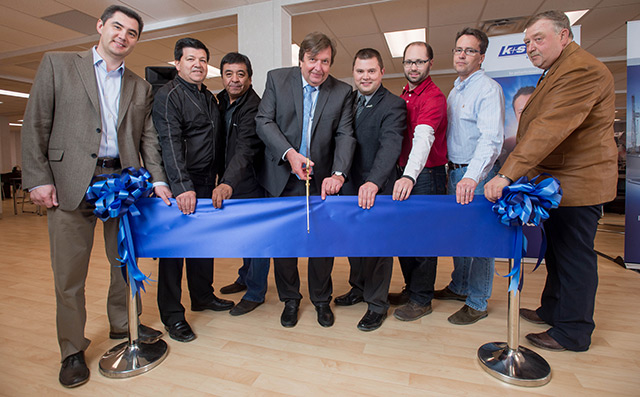 The official opening of the K+S Potash Canada GP (KSPC) Legacy Camp was celebrated today with a ribbon cutting ceremony at the construction camp near Bethune, Saskatchewan.

The Legacy Camp is located 1.5 km northeast of the Legacy Project mine site and is a fully operational and functional accommodation facility offering a variety of amenities – currently having the capacity to house 250 construction workers, with the number of occupants expected to rise quickly to 1,470 by the end of this year. The Legacy Camp was completed on schedule and will house the majority of the overall construction workforce.

“The camp plays a pivotal role in the realization of the Legacy Project by accommodating the workforce required to build a mine of this size,” said Dr. Ulrich Lamp, President and CEO of KSPC. “At the peak of construction the direct workforce will total about 1,700 people working on site, including K+S employees and contractors, to get the job done.”

To reduce traffic in the area and impact on roads, camp residents will be transported to and from the Legacy Project mine site by bus. “The camp helps ensure local residents and Legacy personnel remain safe by reducing overall project traffic during the construction phase,” said Colin Braithwaite, Vice President of Health, Safety and Security. It is during construction when the number of employees is at a peak several times more than the over 300 who will work permanently once the mine is in production.

The Legacy Camp provides a great opportunity for K+S Potash Canada to partner with First Nations and Métis people. Points Athabasca FHQ Construction is a First Nations owned company and is a partnership between FHQ Development Corp, Points Athabasca and Graham. Points Athabasca FHQ was contracted to construct the underground utilities, including: sewer, water, natural gas and power, and will provide the site services and maintenance. ATCO Structures and Logistics and George Gordon First Nation have partnered to operate the camp. Tron Power is owned by English River First Nation and is the wastewater hauling contractor for the camp. It is expected that by the end of 2014, approximately 200 First Nations and Métis people will be working on the Legacy Project, with 84 of those working at the Legacy Camp.

Other contractors played a key role in the development of the camp. PCL was responsible for building the water building, parking and lighting facilities. Clean Harbors is the manufacturer of the camp modules and responsible for their assembly at site. AMEC is the Design and Project Management Contractor for the Legacy Project, including the camp.

The camp will remain operational during the construction and commissioning phase of the Legacy Project. Afterwards the camp will be decommissioned, disassembled and removed from the area for reuse in other projects.

K+S Potash Canada GP is part of the K+S Group, an international commodities company. We have been mining and processing mineral raw materials for 125 years. The products we produce from them are used worldwide in agriculture, food and road safety and are important elements in numerous industrial processes. The nutrients potash and salt are accompanying the megatrend for the future: a constantly growing global population is becoming increasingly prosperous and striving for a more modern standard of living, which results in an increasing consumption of mineral raw materials. We serve the resulting growth in demand from production sites in Europe, North America and South America as well as through a global distribution network. K+S is the world’s largest salt producer and one of the top potash providers worldwide. With more than 14,000 employees, K+S achieved revenues in financial year 2013 of about € 4 billion and an EBIT of € 656 million. K+S is the commodities stock on the German DAX index. Learn more about K+S at www.k-plus-s.com.

K+S is putting its more than one hundred years of mining experience and world-class expertise to work on the Legacy Project, a potash mine and production facility being built near Moose Jaw. It will be the first new greenfield potash mine built in Saskatchewan in nearly forty years. Commissioning is targeted for the summer of 2016. K+S projects to reach the two-million-tonnes-mark of production capacity at the new location at the end of 2017. The Legacy Project will mean new job opportunities for Saskatchewan workers, and new business opportunities for Saskatchewan companies supplying goods and services to this major economic development. K+S is growing Saskatchewan, while providing the potash that is needed to help feed a growing world population. More information at www.ks-potashcanada.com.