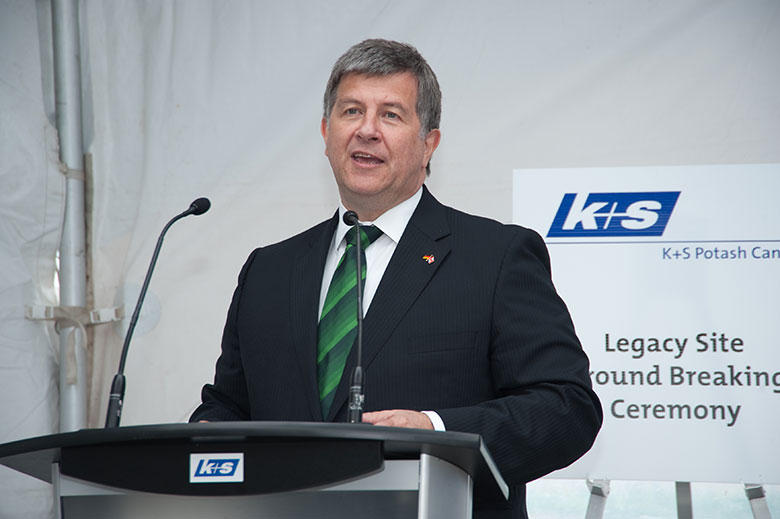 Also at the podium was Richard Wilson, current President and CEO of K+S Potash Canada GP. He provided an update as to the current status of the Legacy Project. “We’re in the process of finishing initial work on the project,” he shared. “This work is primarily comprised of infrastructure development and the first stage of the mining process – the road work, earthwork for the plant, drilling of the first wells, and the establishment of the supporting water system.” He also announced K+S Potash Canada’s new branding campaign, which will integrate a more up to date website and e-recuitment platform.

“This is certainly a great day for the people of Saskatchewan,” said Minister McMillan. “For the first time in over 40 years, a brand new potash mine will be built in our province. The jobs and economic development from this project will help us to continue to grow our economy, and keep the Saskatchewan Advantage.”

The ceremony concluded with the ceremonial sod-turning, with the shovel-bearers consisting of Saskatchewan Minister Tim McMillan, CEO Norbert Steiner, President and CEO Richard Wilson, and incoming President and CEO Dr. Ulrich Lamp. A $10,000 donation was also made to the Saskatchewan Apprenticeship and Trade Commission for their Saskatchewan Youth Apprenticeship program. The donation will allow for a $1000 scholarship to go to a deserving student in the RM of Dufferin for the next 15 years. Doug Christie, the vice-chair of the Saskatchewan Apprentice& Trade Certification Commission Board of Directors, was in attendance to accept the cheque.

K+S Potash Canada GP is part of the K+S Group, one of the world’s leading suppliers of standard and specialty fertilizers. In the salt business, K+S is the world’s leading producer with sites in Europe as well as North and South America. K+S offers a comprehensive range of goods and services for agriculture, industry, and private consumers, which provides growth opportunities in virtually every sphere of daily life. The K+S Group employs more than 14,000 people. The K+S share – the commodities stock on the German DAX index – is listed on all German stock exchanges (ISIN: DE000KSAG888, symbol: SDF). More information about K+S at www.k-plus-s.com.

K+S is putting its more than one hundred years of mining experience and world-class expertise to work on the Legacy Project, a potash mine and production facility being built near Moose Jaw. It will be the first new greenfield potash mine built in Saskatchewan in nearly forty years. Production is targeted for 2015. The Legacy Project will mean new job opportunities for Saskatchewan workers, and new business opportunities for Saskatchewan companies supplying goods and services to this major economic development. K+S is growing Saskatchewan, while providing the potash that is needed to help feed a growing world population. More information at www.ks-potashcanada.com.